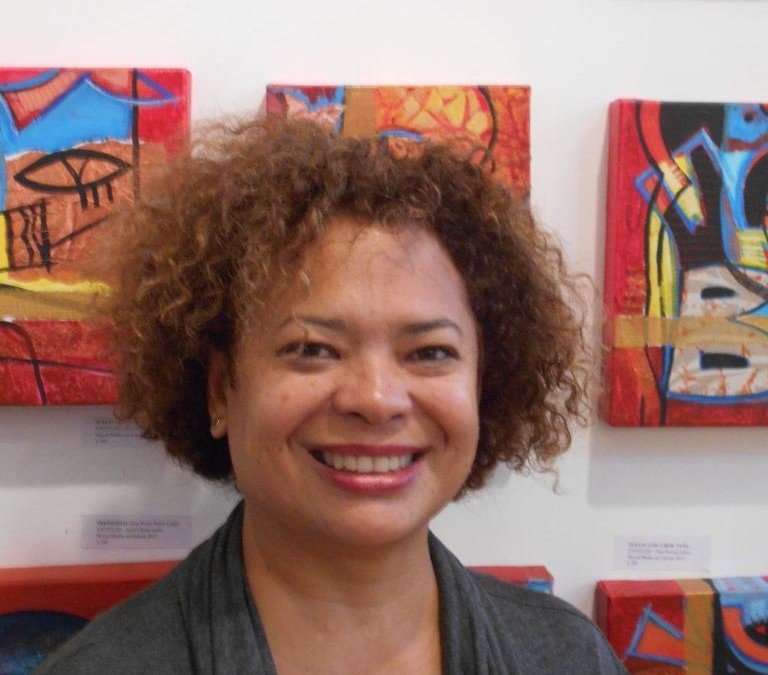 Arrived London safely on the morning of Sunday 18 October and began work that evening. Only took a few hours to recover from that long flight – even my shoes were tired! – before diving into painting 19 canvasses (10×10 inch deep edge) preordered and waiting. 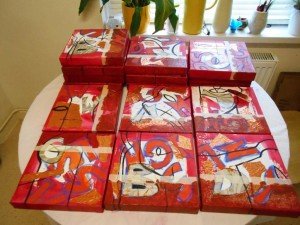 Past Present in progress

I stayed with Helen Hayward, whom I knew from Grenada, when she taught art at TAMCC. Many of her students (Winfield, Vanel, Nameka, Vakisha, Teddy, and others) are now successful in their own right. I was so grateful to have the use of Helen’s studio to complete the works that were due to be displayed on Friday afternoon at the Parallax Art Fair in Chelsea. Soon enough, Friday came, the work was exhibited, and that weekend passed in a blur. The preview night was wall-to-wall people. Many stopped by – including and especially my Grenada support team! Go Grenada! – to enquire about my Past Present series, fresh off the easel. 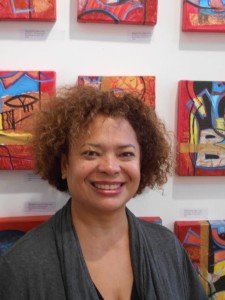 At the Parallax Art Fair

Past Present is a series long overdue. In 2012, I spent 10 weeks in the UK, most of that time huddled in the National Archives, the London Metropolitan Archives and the British Library. I even spent some time in the National Libraries in Glasgow and Edinburgh. All this effort was to gather information on Grenada that I could reproduce in a series of artworks. Call me crazy. Within four and a half days, I created Past Present, a series of works to coincide with the UK observance of Black History month. Given that Grenada is a former colony, and given the current chatter about reparations, painting in London my contribution to the ‘R conversation’ between a former colony and the Empire, was an appropriate launching point for my first public showing of work in London.

The 19 canvasses of Past Present were created using some materials gathered here and some I brought with me. Fragments of silver embossed damask wallpaper (indicative of the colonial aristocracy) were placed next to fragments of copper-sheets in which had been wrapped our delicious organic Grenadian chocolate (indicative of our agricultural wealth, as well as the ‘coppers’ the large metal cauldrons used on the plantations.) These were superimposed on layers of acrylic paint in a stereotypical brilliant Caribbean palette. A strip of old gold crossing a third of each canvas referenced the bulk of the wealth exported from these estates during this time.

Each Past Present canvas references a place in Grenada named during the plantation era for and/or after a person or place in the UK. One is titled ‘A’ for John Julius Angerstein, whose personal art collection founded the National Gallery, Trafalgar Square. Angerstein derived substantial income from estates in Grenada. I found that and more during my 10 week delve into Grenada-UK history.

There are 127 estates listed in the 1829 publication by F W N Bayley, The Island Bagatelle – containing political enigmas on the estates in each parish of the island of Grenada. This book is one of the treasures I discovered in 2012 at the British Library. The completed series should include at least another 50 canvasses, for which I am gathering materials to support.

A week after the Chelsea show, I displayed Past Present at the Autumn Show of La Galeria in Pall Mall. Given the context of this series, I was pleased to have this work shown in a prestigious gallery, located a three minute walk from the National Gallery. La Galeria is also a three minute walk from 100 Pall Mall, the home of Angerstein, which was retained as the National Gallery’s first premises, after the Government purchased 38 paintings from his impressive collection in 1824, to form the nucleus of the national collection. 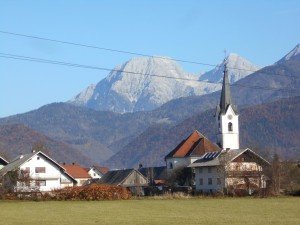 Brnik – view from my window

The morning after the Pall Mall opening, I travelled to Spodnji Brnik, Slovenia to visit with artist colleagues, Lojze Kalinsek, and Irena Gayatri Horvat. During my week’s stay, I co-facilitated a workshop with presentations of my work to students at the Mengeš Elementary School, and held an artist talk with the Visual Arts Association of Mengeš. I also managed to begin a short series based on Slovenia’s goats, mountains and the chapels that seem to adorn almost every field I passed. I used paper handmade by students of Lojze’s art class with acrylic paint on Russian canvas. 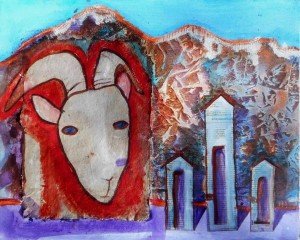 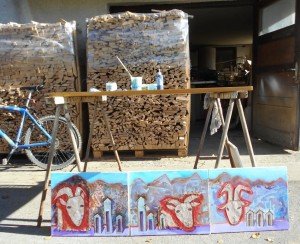 Studio – in the cold outdoors, Slovenia

Of course a visit to Slovenia’s Museum of Contemporary Art was in order, and several artworks from the permanent collection caught my interest. Across from the museum is Ljubljana’s largest park, called Tivoli. The park hosts a castle, plus many artworks and exhibitions open to the public. The word ‘Tivoli’ means summer place, and derives from Tibur, Lazio, an Italian ancient town which is known to be the inspiration for other places (including in Grenada) named Tivoli. It seems everywhere I travel, I am connected with Grenada.

My intended itinerary of Rome, Barcelona and Paris has been shelved for another time. I was to be in Paris this past week to return to London Saturday 14… the world knows what has happened there on Friday 13, and maybe less knowledge of Beirut the day before that.

Back in London, I am still painting. Homeward bound Wednesday.