ShortKnee: Descendant of a Lost Tribe? 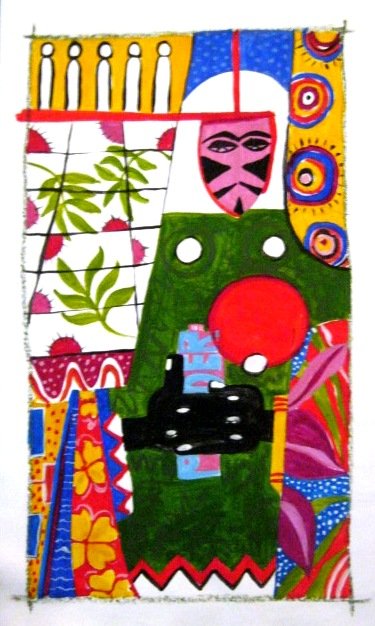 The ShortKnee masquerade was created post-Emancipation by Grenada’s creolised population to reconnect with an ancestral past. The earliest record of the word ‘ShortKnee’ in Grenada dates back to the 1920s, and references the knee-breeches. Disguised as a traditional character of the annual carnival, the ShortKnee are Egúngún, symbols of a cohesive Yorùbá cultural identity in exile over 3000 miles away on a small island in the eastern Caribbean. These oversized beings  never laugh. Their faces hidden under white head towels, behind masks of painted metal mesh. Their bodies somewhere under yards and yards of deliberately mismatched fabric. Masking was an integral part of Yorùbá religious culture which withstood the horrors of the Middle Passage. Grenada was a Yorùbá cultural area in the New World and the dominant African influence in the years immediately following Emancipation, arriving in their hundreds as indentured servants, and settling exclusively in the villages of Rose Hill, Concord and Munich, until the early years of the 20thcentury.
As with the majority of my ShortKnee translations, it is the spirit of a particular work which inspires a reinterpretation. Background on the artist and/or the work itself somehow leads me to uncover ties and links between the original work, my translation and my ShortKnee research. The world wide ShortKnee – wws.
The text to Ras Akyem-I Ramsay’s 1995 work, titled Moses in Art in the Caribbean, An Introduction (Walmsley and Greaves) states that Moses is a key figure in the Rastafarianism, Christianity, Jewish and Islamic religions. As we know from schooldays, Moses resorted to extreme measures when his many attempts to get the Egyptian Pharaoh to voluntarily release him and his people from bondage, and to let them find their promised land, went unheeded. In preparing my translation of Ramsay’s work, I came across pencil sketches I had done during a visit to the exhibit ‘The Secrets of Tomb 10A, Egypt 2000 BC’ at the Museum of Fine Arts Boston some years ago. The collection of shabti – small funerary statues which the ancient Egyptians believed would perform work for them in the afterlife, carpenters, soldiers, brick makers, people engaged in work in granaries, bakeries and breweries, oxen plowing a field and more – was made for the burial of a local governor, reflecting in wooden miniature everyday life on his estate. A Pharaoh-like statue inspired these two ShortKnee Pharaoh-like pieces, done in blue marker, acrylic paint wash, and overlaid with blue Adinkra stencils used to represent (i) independence, freedom, emancipation (ii) law and justice, slavery and captivity (iii) wisdom, creativity (iv) initiative, dynamism and versatility and (v) time change.
The similarity of the Egyptian Khat headdress to the white towel headdress of the ShortKnee caught my attention and led me to find many spidery connections between Yorùbá, Egypt and many other peoples, leading me to hazard a guess that somewhere in the recesses of our history – the ShortKnee may be a descendant of a Lost Tribe? Yorùbá was then the alternative place name for the largest and most powerful of the earliest states, Ọyọ  the source of the multi tribes of Yorùbá, which became the name for the entire linguistic and cultural group after the second half of the 19th century.
Basil Davidson’s The Lost Cities of Africa 1959, state the Yorùbá during antiquity lived in Ancient Egypt before migrating o the Atlantic coast. Dierk Lange’s ‘Origin of the Yorùbá and The Lost Tribes of Israel’ suggests an origin of the ancestral Yorùbá in the Near East. Davidson also notes that the great percentage of enslaved persons came from the Yorùbá nation, inundating the new world (and Grenada) with a people knowledgeable of their culture – war/political prisoners of elite classes, soldiers and warrior priests. I found that in 1812, Sudanic author Muhammad Bello in his ‘Infaq al-Maysuur’ stated that the Yorùbá were remnants of the Canaanites of the tribe of Nimrud who were expelled from Iraq and who fled to the west before they proceeded via Egypt and Ethiopia until they came to Yorùbá.  Further, the Handbook of Yorùbá Religious Concepts by Ifa Karade, indicates that Yorùbá history begins with the migration of an East African population across the trans-African route leading from mid-Nile river area to the mid-Niger.
Back to Moses. Moses’ red robe (worn over his other clothing) is similar to the tunic of the ShortKnee, which is referred to as a collar and not a tunic. It contains small mirrors on the front and back, and is often trimmed in white lace or coloured zig zag braid, referencing the sawtooth borders on Egúngún fabric panels called igbala, which means ‘something that saves a person’. In ancient Egypt collars made up of multiple rows of beads and charms were popular among wealthy and important people. Again, the spirit of this piece links to the African Slave Trade, the Yorùbá peoples and their connections Egypt. Could this be the root of the mirrored tunic of the ShortKnee, and the reason why it is called a collar? My translation of this work, speaks to the ShortKnee costume fabric colour, pattern and texture, and the use of white powder to call or veil the spirits – thrown into the air, it parts crowds to rival Moses’ staff.